Ohhh but I am Sgt. Benson.
No surprise to my wonderful readers and fellow bloggers. You know I like to change things up from time to time and I’m diggin’ this layout – for the moment.

I made a tab up top of my page specifically for my 365 Days Of Granny Squares. If you’re interested, take a looksie. I know that crafting isn’t everybody’s cup of tea. I’ll probably be making more tabs for other things as well, again, just for the curious eye.

It’s been a slow Saturday out this way. The snow is melting, the temps will be near 40 this week. Plenty of sunshine and all is right with the world. At least this corner of the world.

Spent the day cleaning, cleaning, cleaning and tomorrow I’ll be at the mall in search of the perfect tee shirt for my perfect daughter so I can use my Cricut and heat press to put some cute sayings on said tee shirts IF I can find what I’m looking for.
I’ll post a pic when it’s done, which hopefully will be tomorrow.

Lots of projects in the making. I’ll post ’em here or make a tab. Maybe both.

Really nothing earth-shattering happening today. Oh. A little town about a half hour away (Nampa, Idaho) was trending on Facebook today. Apparently finding two dead men in an apartment is trendy. Who knew?
I’d post a link but there’s no news to report. Two dead Mexican guys, that’s it, that’s all. No leads. No answers.
They probably knew each other and it was probably over drugs. If I had to guess…

Tomorrow night the Golden Globes will be on. Anybody watching? I heard that all of the women/men who have been sexually assaulted, offended, the #metoo movement will all be wearing black. Not entirely sure how that’s going to help anything but whatever..
I have my own thoughts on that whole #metoo movement but that’s for another post.

I’m super tired and my eyelids are slamming shut. 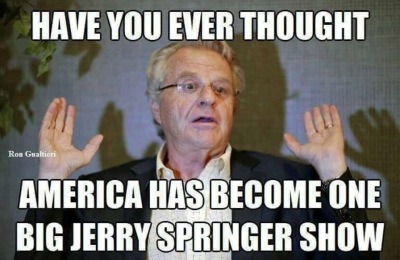 I don’t know about America on the whole but I can definitely vouch for my neighbors. Remember when I told you about our new neighbors?
You can find one post here and another one here.
Well, we’ve got another neighbor. Not new. She and her flavor of the month live behind us in a totally separate complex and seriously if anyone ends up shooting up the neighborhood it’ll be those two. With a 3-month-old baby in the house…

We live in an apartment on a lower level. We have a small patio, with a small backyard and invisible boundary lines from one next door neighbor to the next. We have a fence in the back that separates our apartment complex from the one on the other side of the block.
The fence looks like this. Chain link with white privacy slats. Our fence isn’t as new but the slats are all intact. You get the idea. 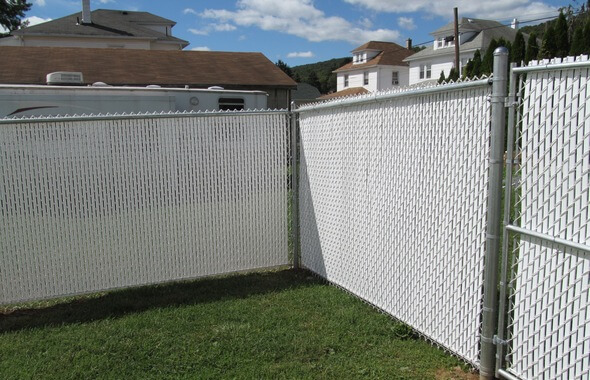 I would’ve gone out and taken a picture of our actual fence but it’s late and the flash from my phone would’ve really freaked out the psycho then.

She yelled at my kid – once. – And every night she and that flavor of the month that got drunk one night and drug her across the swamp argue at the top of their lungs. Every night. Into the wee hours of the morning. They even chase each other around the complex!

Other neighbors on our side have told them to shut the hell up. Everybody has called the cops on them and the cops do show up but as soon as they leave the two lovebirds go at it like two junkyard dogs. I can’t imagine a bigger waste of time for our law enforcement than having to deal with those idiots every night.

I wonder how much trouble a person would get into for tossing a strip of firecrackers over the fence while they’re in the middle of one of their nightly Jerry Springer-a-thons….
Asking for a friend.

But wait! There’s more! Our new neighbors two doors down in the next building? They’ve gone at it like junkyard dogs but so far they don’t appear to be repeat offenders.
My son and I were standing outside under our carport and this chick comes staggering up the sidewalk asking us to call 911 while her boyfriend is coming up behind her…
She tells him to get away, he does, he says he’ll call 911. I had my son call just to make sure because this girl was a bloody mess. Prince Charming punched her in the face and busted her nose and knocked some teeth loose! The cops came. The paramedics checked her out.

She was kissin’ on him the next day..

The other night my son and I were coming in from the store and we heard somebody scream in another building and just as I felt my “S” puffing up on my chest, my son was like, “no mom, just keep walking.”

***Oddly enough, spent a good portion of the day shopping looking for those 75% off Christmas sales. I’ll be back at it again tomorrow. Biscuits n’ gravy for dinner to keep the chill away. It worked.

***IN THE CRAFT CORNER:
One of my crochet groups is having this challenge,
“A Granny A Day Crochet-Along.”
We’re following Yarnutopia on YouTube and their
365 Days of Granny Squares tutorials.
This is my square #4.  (I’m using my scrap yarn.)

Sorry for all of the ugly granny squares but I am seriously using up scrap yarn. I tied it all together, rolled it into a ball and this is how it’s coming off. Once it’s gone I’ll be making normal granny squares.