***Looks like I gave up Facebook and Instagram (for Lent) just in time. Not at all missing the barrage of news/fake news/political tit for tat/NRA disputes, etc., that rears its ugly head with every school shooting, every random shooting, and/or every other atrocity that we humans inflict upon our fellow humans.  There are prayer chains and marches, tears and anger and blame going round and round and then Facebook rolls out its (insert tragedy here) profile frame.

And for what??? Changes? What changes?!

Kindergartners in Sandy Hook were mercilessly gunned down. KINDERGARTNERS! Little ones just barely out of diapers!
Nothing changed for them.
Why should we expect things to ever change?

***I have no solutions but I do have suggestions.
1. – THOROUGH background checks!
2. – If you have a DOCUMENTED MENTAL ILLNESS, no gun for you!
3. – Parents. If your child under the age of 18 takes a gun to school, most probably yours, and MURDERS his classmates and teachers. YOU BOTH GO TO PRISON. Your child had access to your weapon. That’s on you. Or any other adult in the home who owns the weapon and did not secure it properly.
4. – Same gun laws across the board from state to state so we’re all on the same page and not going across state lines to purchase otherwise illegal guns.
5. – PUT THOSE ASSAULT RIFLES AND THAT BUMP STOCK AND ANY OTHER SEMI-AUTOMATIC WEAPONS where they belong. With our military and our police officers. Period.

I’ll leave you with this and jump down off of my soapbox.

“The assault rifle is a class of weapon that emerged in the middle of the last century to meet the needs of combat soldiers on the modern battlefield, where the level of violence had reached such heights that an entirely new way of fighting had emerged, one for which the existing weapons were a poor match.”

“The name “assault rifle” is believed to have been coined by Adolf Hitler.”

“Hitler hailed his army’s new wonder weapon by insisting that it be called not by the technical name given it by its developers, the Machinenpistole (the German name for a submachine gun), but rather something that made for better propaganda copy. A Sturmgewehr, he called the new gun: a “storm” or “assault” weapon.”
(A Brief History of the Assault Rifle – The Atlantic) 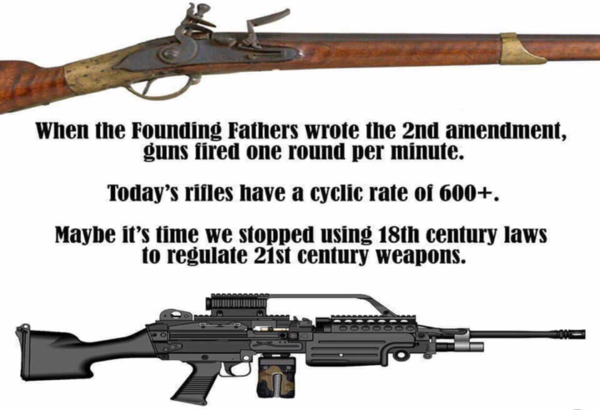 I LOVE YOUR COMMENTS! GIMME' AN EAR FULL!! Cancel reply